Our school promises “A World of Opportunities” for its students. If I had to choose a single symbol that represented this commitment it would that of a door. Doors are passages into new realms and can spark our interest as to what exists beyond them. They are inviting but can also be mysterious. Doors found in different cultures may be plain or elaborate, but they all either lead us deeper into a given area or open to the expansiveness of the exterior world.

The doors of opportunity at FIS are many. Our Class of 2013, who recently graduated with International Baccalaureate scores well above the world average, found doors opening 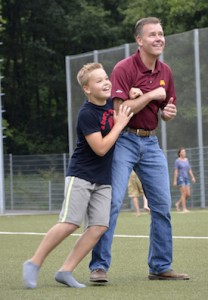 to exceptional colleges and universities around the globe. Students who come to our school with little or no English, and then add it to their home language, find they are capable of navigating the world as never before. The same is true for native English-speakers who become fluent in German, French or Spanish.

There are many reasons our school is a leader in international education, but a key factor is the number of “doors to discovery” that we offer students. Do you want to be a concert cellist? An FIS door is open. Interested in creating product prototypes in Design and Technology using a 3D printer? Another door awaits. Want an early taste of life as a scientific researcher through an internship at the Max Planck Institute? Knock and enter.

FIS was not created to fit students into a certain mold. We are not a franchise where workers punch time-clocks to produce graduates with dreams of uniform shapes and sizes as they line up to walk through a prescribed door. At our school, students burst forth like multi-colored fireworks in pursuit of their passion, opening doors to fields in marine biology, engineering, business or theater.

When I was a young science teacher in the early ’90s, I spent two hours each week volunteering at a nursing home on the island of Guam with patients who had Alzheimer’s disease. One of the patient’s favorite television programs was a game show called “The Price is Right.” At the end of each show, the winning contestant had to choose between “Door Number 1, Door Number 2 or Door Number 3” to find the grand prize. At FIS, the Grand Prize is not behind a single door, but rather is a key that students are given that will unlock any number of doors they choose to enter as they pursue their dreams.

Published on:October 24, 2013 Category: Enhancing the lives of others, graduation, Learning, Life Lessons, Preparation No Comments on Keys to Success