Recently a teacher I hold among the finest educators on the planet, sent the following message to his friends and coaches. I was pleased to be among that group and now pass it on to you. Here’s to you believing in your “players” whether on the field or stage, in the classroom, or as they contribute to service project.

I wanted to share this as it hits home for me…. And makes me think of what you all do! 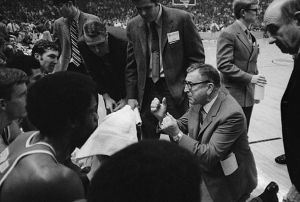 Recently one of my Dad’s ‘heroes’, Homer Smith, passed away. I might have met Homer once, though I really don’t recall. I do recall that he was a ‘household word’ in our house because he and my Dad were such close friends and mentored each other. As he was one of my Dad’s heroes, he took on mythic proportions for me. I believe they met in college (but that might be wrong) and their friendship really solidified when they were both serving the Army in the 70’s.

Homer Smith was an American Football coach. Homer had a 37 year career and coached with many teams including Army, UCLA, Alabama, Arizona, Air Force, UOP, Davidson, and the Kansas City Chiefs. At his funeral, Homer’s son-in-law shared this story about Homer and it is one that warrants repeating:

FROM Leamon Hall, Homer’s Son-in-Law:  It was in the spring of 2002, when I was the head coach of my son’s Travel Baseball Team. Our team was newly formed so I only had 3 or 4 really good players, several OK players, and one particular player who was not gifted with a lot of athletic ability. In my immaturity as a coach, I was frustrated because we were unable to compete with the really good teams. The batted baseball always seemed to find my weakest player at the most critical times in the game, many times resulting in a game losing error.

From time to time, Homer and I would talk about baseball and “my” team, as he was very interested in his “grandson’s team”. One day I went on and on to him as to how bad several of my players were and how frustrated I was as a coach. I will never forget what he told me and in such a noncritical, but sage manner, he said “Leamon, coaching is a privilege that makes even the strongest of men humble. Coaching is about more than just hits, runs and errors ……… it is about each players ‘life journey’ and what small impact you may have on his becoming a man. Your players will remember you, not so much as to what you coached, but how you coached – never stop coaching them – that is the best that you can do.” He went on to say something else that really humbled me: “Every player has the right to have someone who believes in him ……………….. are you that person?.”

I just love this story as it puts “it all in perspective”. So here’s to you and Homer Smith. Keep doing what you are doing!

Published on:June 29, 2011 Category: Uncategorized No Comments on Coaching and Heroes
1 2Next Page »