Frankfurt International School’s Class of 2015 aims for the stars

On Saturday, 6 June, Frankfurt International School officially graduated its Class of 2015.  The ceremony, which took place in Oberursel’s Stadthalle, was a wonderful one. Below is the opening speech that I delivered.

Honored guests, distinguished faculty, relieved parents and – drum roll please! –  the 2015 graduates of Frankfurt International School! Welcome one and all to our school’s 49th commencement celebration.

For many of us gathered here today, decades have passed since we graduated from high school. Given that length of time, it might be hard to remember what it felt like to sit through a graduation ceremony like our 130 seniors are doing right now. Even though I have been involved in education most of my adult life, I must admit that each time I address a graduating class, I secretly wish that I could read their minds to know what they are thinking.

Are they pondering the intellectual pursuits that await them in university? Maybe.

Are they thinking about question twelve on their IB Paper 2? I don’t think so.

Are they still considering the metacognition questions posed in their beloved TOK class? Perhaps.

A more likely guess of what they’re thinking about as I stand here delivering this speech, is their last day of school – and all the merriment that ensued. In short, ladies and gentlemen, these fine young men and women are ready to CELEBRATE!

While it’s natural to want to celebrate after the incredible accomplishments all of you have made – and I’m guessing faculty and parents have a few celebrations in mind as well – let me send you away with a few additional thoughts.

Although it would not do justice to our school’s mission statement to reduce it to four simple words, if I was forced to it would result in this: We Inspire to Inquire.

As you leave FIS, I hope all of you are taking with you one skill with you above all others. It’s not knowing how to calculate perfectly, or play an instrument without mistakes, or speak another language or know volumes of historical facts. Those are important, too, but we know you’re already capable of them. Instead, I hope you leave us with…wanting more.

More meaning in all aspects of your life.

In other words, I hope we have inspired you to become seekers – a generation on a quest to find answers that will bring meaning to your life, to the lives of those around you, and to our world.

This quest for understanding is as old as humanity itself. When your grandparents were born, it would have been considered a fools folly to believe that a man or woman could be sent into space. However, today’s guest speaker has not just gazed at the stars like the rest of us – he’s actually flown his spacecraft among them.

And even when you were born, it would have been considered a joke to send forth a spacecraft with the intent that,10 years after its launch, that same space probe would be able to land on a comet while it sped across the galaxy. But now, in your senior year, coordinated in a control room not far from our campus, that same space probe has successfully landed on a comet after a decade-long journey.

So to our students I say this: aim for the stars. Don’t allow anyone to tell you that something you believe in cannot be accomplished.

Many of you came to FIS with limited English. You may have been unable to play a certain sport or instrument, or were afraid to speak in front of a group. However, the graduates I see before me now are talented, confident and driven. I know I speak on behalf of our faculty, your parents, and other guests gathered here today when I say that we have every bit of confidence that you can and you will change the world.

Now a closing word for your parents.

Whether your graduate is the first or last to leave the nest, I am sure that it has become clear to you that to be a parent is to become an expert in the art of letting go. This is really counterintuitive because as we are growing up, we are told to hold tightly to things of value so they don’t fall and break or get lost and left behind. I don’t know how many times I’ve told my own children “Don’t Drop It!” or “Don’t Lose It!” when I have entrusted something of value in their care.

Paradoxically, we have been entrusted with the care of our children, but with the ultimate goal of releasing our grip and setting them completely free.

It’s about a wise mother who loved her young child very much. She knew the “art of letting go” was one of the most difficult lessons for humans to learn, so she decided to begin teaching her son this lesson very early.

Frequently they would visit the zoo and she would buy her son a helium balloon, which he carried as they walked among the animals. The boy loved balloons and it gave him great joy to tug at the string and watch it sway in the breeze. But each time they left the zoo, his mother required the boy to let the balloon fly away up into the sky. She taught him that once we love something, it is always ours, even after we have let it go.

It was a hard lesson in the beginning, and the boy cried the first few times he let the balloon go. But as their zoo visits continued over the years, the boy learned, and eventually began gleefully throwing the balloon into the air to watch it dance across the brilliant blue sky. He rejoiced in having not only one balloon, but an entire rainbow of balloons that continued to grow in his mind’s eye – and in his heart. 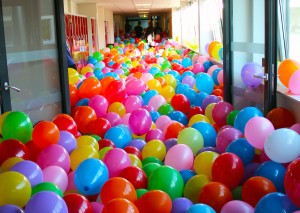 So parents – and faculty members – it is time for us to let go. We set our graduates free with a great sense of pride, knowing that they are indeed a beautiful rainbow of balloons – forever cherished and always welcomed home.

Now I have the great pleasure of introducing our 2015 FIS Commencement Speaker.

Daniel Tani is a former NASA astronaut who received both his bachelor and masters degree in Mechanical Engineering from MIT. Daniel’s career began in the private sector but eventually led to NASA’s launch and control room, where he led a team of engineers. His big break to “stardom” began in 1996, when he was selected as a NASA astronaut candidate. He underwent years of training before his career blasted off on the Endeavor space shuttle to the International Space Station in 2001.

During that mission he orbited earth 185 times in 11 days, including space walking outside the ship. For parents in the audience who like to brag about their frequent flyer accounts, that’s a total of 4.8 million flying miles on one business trip!

But those 4.8 million miles were but a but a short hop compared to Daniel’s return to space six years later on Expedition 16. During his second mission he got out to stroll in among the stars on five space walks during the – now get this – 120 days living aboard the International Space Station, a ship as long as a fussball field that travels 27,000 KM per hour through space. 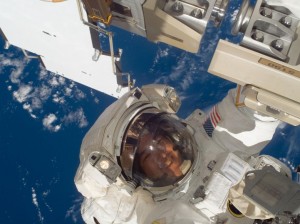 You would think that being an astronaut would be enough to pad a person’s resume, but Daniel wanted even more out of life and therefore chose to train to become an aquanaut as well. In 2002 he served on NEEMO 2, an undersea laboratory where he lived and worked at the bottom of the Atlantic Ocean.

Although Daniel Tani has flown higher and dove deeper than any of us could even dream of, he has very much in common with our international FIS community.

His parents are Japanese American and his wife is Irish. He is a father of three children and like many Dads in the audience enjoys a good game of golf. In fact, he brought a flag from the St. Andrews golf course into space and photographed golf links from all over the globe while he floated above earth.

I cannot think of a better earthling to speak to our graduates and parents on the subject of launching yourself into the future! So without further ado, it is my pleasure to welcome to the podium, Daniel Tani.

Many congratulations to the 130 students in our Class of 2015. I have all the confidence that they will make a magnificent mark on our world as they begin the next leg of their learning journey.